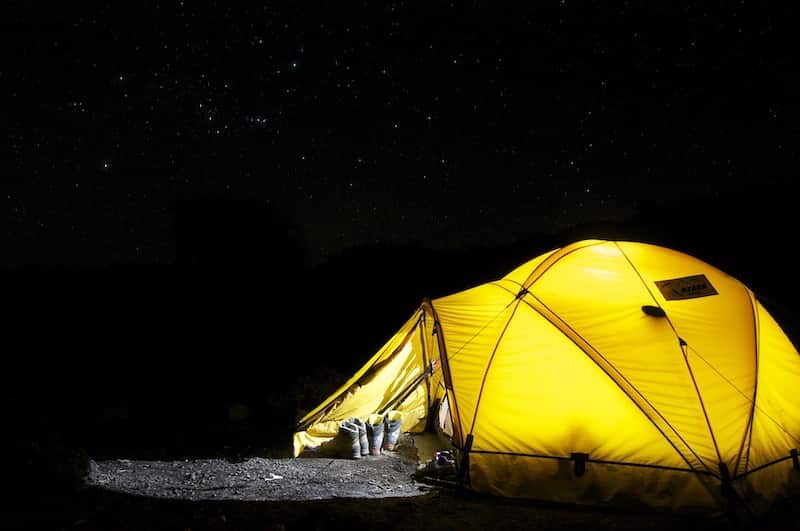 The night is much darker than we’re used to once you get away from the city. This increases the need for lighting. Yet you don’t want to make things so bright it bothers other campers.

So, how many lumens do you need for camping? For camping you will need between 35 and 65 lumens for most applications, though the average in-home flashlight puts out 10 to 30 lumens. Since camping spots typically lack background light sources like electric signs in the distance, computer screens on in the next room or car headlights on the street, you need more light to work in the woods than you would if the power went out in your home.

What Is a Lumen?

Lumens are a measure of light output. The more lumens the light has, the farther the light from the source travels. This is different than watts.

Watts measure the amount of energy an electric light draws. A lantern could have high wattage but a modest lumen output.

How Dim Is Too Dim?

A 20 lumens flashlight may be enough to find your way to the latrine assuming there are no trip hazards.

A 30 to 65 lumens beam gives you enough light to see who or what is crawling on your truck, avoid pot holes on the trail to the latrine and find your glasses in the early morning.

While 65 lumens sounds low compared to industrial grade lights, remember that you’re in a darker environment when you’re away from civilization, as well.

Note that light inside of an enclosed area will be reflected back at you. This means that a low light setting of 15 lumens is enough to see many items laying around the bottom of a tent.

A light level of 100 lumens is enough to make the inside of a tent bright.

How Bright Is Too Bright?

There are flashlights and head lamps that put out 500 lumens, but this is overkill. Most campers aren’t going caving.

The brightest light you most likely need for detailed up-close work is 100 lumens, and most don’t even need that. However, there are reasons not to have a light source brighter than this.

Turning on a light source that bright is like shining car headlights in the face of everyone in that direction.

If you do turn on a light this bright, put it in the low-light option so you don’t wake up wildlife that think it is daytime in addition to your camp mates. This will also help save your battery.

If you want to create daylight-like conditions, a lantern set at 200 to 300 lumens is enough to light up an impromptu venue. That’s also how light many lanterns flash when set to act as an emergency beacon.

How Can You Get the Most Out of Your Lights?

Consider a narrow beam flashlight instead of a wide-beam. You won’t have to set it on such a bright setting if it only has to light up a narrow path in front of you.

Another way to avoid blinding your campmates is to use a less intense red or blue setting. This allows you to see things up close in bright light without bothering others in the distance.

Use lanterns instead of flashlights. The lantern will emit relatively bright light (averages 40 lumens) in all directions, reducing the need for smaller, bright lights.

They typically have low to high light settings. The brightest modes are typically in the 150 to 350 lumen range, though the brightest hit 700 lumens. You can use a diffuser to generate gentle light that won’t blind anyone who looks at it.

Use a head lamp when you’re concerned about tripping. This will free up your hands to deal with obstacles, and it naturally provides a bright light in whatever direction you’re looking.

Head lamps are often around 100 lumens. That’s enough to read or do detailed work by.

What Factors Should You Consider When Shopping for Camping Lights?

The brightness level of the camping light is one factor to consider. The ability to set any one of a number of light levels is essential to extending battery life and having just the right light level.

Another issue to consider is battery life and rechargeability in the conditions you’ll be camping in. For example, alkaline batteries lose half their power storage capacity when it drops below freezing.

That makes them a poor choice for winter camping. Lithium batteries hold their charge better in cold weather. If you’ll be winter camping, this is a strike against any light that requires alkaline batteries.

An easy to use on/off and light level control button is essential, since a light that’s hard to turn all the way off will drain the battery to nothing.

Some lanterns or flash lights have a short battery life no matter what you do, because of how many watts they draw. This is accelerated by any additional features built into the light such as built-in radios.

A solar cell built into the top of the light can trickle charge it, but now you have to worry about how many charge cycles it can go through.

Think about the environmental conditions you’ll be in. If you’re going to be camping in rainy areas, a water-proof light is a plus. The same is true if you may be taking your lantern or flashlight out by the lake.

Adjustable legs that let you create a stable base for a lantern are a plus, especially if it elevates the lantern above an uneven or damp surface.

Look for handy features like hooks, clips or loops that allow you to secure the light and turn it into a de facto light bulb. Then you can turn that flashlight or lantern into a tent light or beacon.

On the other hand, a lantern or light that comes with a reflector can generate a much brighter beam of light with a lower overall lumen output. 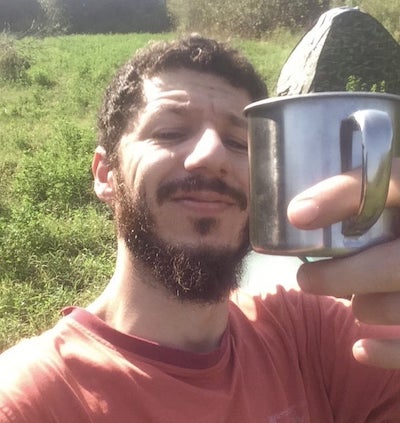 My name is George and I turned outdoor camping into my passion and hobby. I don’t know about you, but for me, there’s something very relaxing about spending time in the outdoors.

Every time I get the chance to sleep out in nature, I return completely recharged with energy and ready to meet another day in the city.

This is my blog where I will share with you my findings, tips, and recommendations when it comes to camping and sleeping in the outdoors.

Check more about me here.

CampingSleeping.com is a participant in the Amazon Services LLC Associates Program, an affiliate advertising program designed to provide a means for sites to earn advertising fees by advertising and linking to Amazon.com.

As an Amazon Associate I earn from qualifying purchases.